I’ve been reading quite a bit about bread, sourdough specifically because I can’t stop baking. Every afternoon, I pull out a hand-kneaded boule or baguette from the oven. Sure, I eat some, but there’s always more to share with a circle of neighbors. We swap our plenties: Bread for garden coffee grounds. Gardenias for granola. Lemons for lavender stalks, slender and fragrant. I don’t require the barter, but my friends are like that.

This new baking habit reminds me of one of my favorite Ursula K. Le Guin quotes from The Lathe of Heaven.

Love doesn’t just sit there, like a stone; it has to be made, like bread, remade all the time, made new.

Ursula K. Le Guin, or UKL as she was known, died earlier this year which prompted me to visit much of her writing that I’d missed, beginning with her blog. This is from her final post:

Once I sang freedom, freedom,
sweet as a mockingbird.
But I have learned Real Politics.
No freedom for our children
in the world of the sayso.
Only the listening.
The silence all around the sayso.
The never stopping listening.
So I will listen
to women and our children
and powerless men,
my people. And I will honor only
my people, the powerless.

What are you reading?

Friends always ask when I drop off the bread, or pick up sun warm blueberries. A response like “Ursula K. Le Guin’s blog” is true, but the question really means What book are you reading that you can share when you’re finished? I tend to group books. One fiction with one nonfiction. One poetry collection with one memoir.

This month my nonfiction read is Valeria Luiselli‘s Tell Me How It Ends: An Essay in Forty Questions. It’s a slim book that recounts Luiselli’s experience working as an interpreter in New York City’s federal immigration court. She works with unaccompanied minors seeking asylum.

“Why did you come to the United States?” That’s the first question on the intake questionnaire for unaccompanied child migrants. The questionnaire is used in the federal immigration court in New York City where I started working as a volunteer interpreter in 2015. My talks there is a simple one: I interview children, following the intake questionnaire, and then translate their stories from Spanish to English.

But nothing is ever that simple…The children’s stories are always shuffled, stuttered, always shattered beyond the repair of a narrative order. The problem with trying to tell their story is that it has no beginning, no middle, and no end…

NPR had this to say about Tell Me How it Ends:

These days, the whole world, including our politics, is being shaped by migration. Few people explore the nuances of this reality more skillfully than Valeria Luiselli, a strikingly gifted 33-year-old Mexican writer who knows the migratory experience first-hand. . . . Luiselli takes us inside the grand dream of migration, offering the valuable reminder that exceedingly few immigrants abandon their past and brave death to come to America for dark or nasty reasons. They come as an expression of hope.

By some odd kismet, I followed up Valeria Luiselli’s book with Before We Were Yours by Lisa Wingate. This novel, which spent more than six months on the New York Times best seller list, is inspired by true events of the kidnapping and trafficking of poor children who were subsequently placed in wealthy homes through closed adoption by the Tennessee Children’s Home Society between the 1920s and 1950s.

For me, the how and why of it, the underpinnings of blackmail, falsified records, and political corruption, while shocking, weren’t most important story. The most important stories were the ones told in smaller voices, or never told at all –– the stories of the children, of their experiences, of their legacy, of their struggle not only to survive and adapt, but to reclaim their lives and their identities. What was it like, I wondered, to be taken from everything you knew, with no explanation or understanding of what was happening… – LISA WINGATE

How hard is it, really, to imagine someone with power would willingly separate a child from her mother? 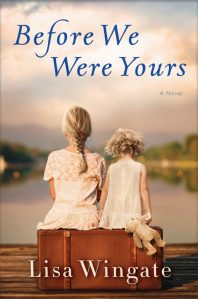 I can’t save every child. But I can make and remake love for the world to be spread by waft of warmth and sustenance. Story by story. We have enough stones.