Last week, I wrote “How forward” for Voice of OC about how to keep working for justice for all, always, especially after the Black Lives Matter hashtag trend wanes. Again.

Find the quietest corner of your room, of your heart, and grieve. Howl if you must. Then listen. Listen to Black voices and believe them when they say they struggle to stay alive. Every. Single. Day. Then stand up with them and for them, but not instead of them and for goodness sake don’t hand-wring. Stand tall and strong, with and for all our fellow humans who have been threatened, incarcerated unfairly, murdered for their “real or perceived disability, gender, nationality, race/ethnicity, religion, or sexual orientation.”

Please read “How forward”  to learn practical steps you can take to work for equality for all.

Do you notice the photo that accompanies my story? 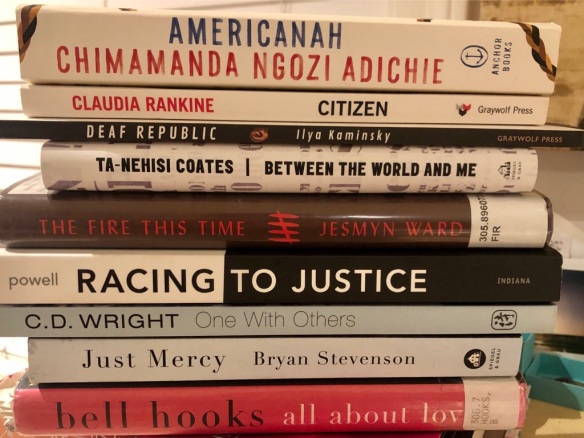 It looks like a simple stack of books. It is. And it’s more than that too.

Yes. This is a fine reading list to begin an education about all the ways racism is systemic. Take your pick. Begin anywhere to start your education, then reach out and we can discuss. I’d love to hear from you.

This stack of books is also more than a reading list. In its compilation, after it’s photographed, it’s called a Book-Spine Poem.

Racing to justice
One with Others
Just mercy

See, I didn’t just pull these books from my shelf haphazardly. Rather, I looked for the titles on my shelf to create an even deeper meaning in conversation with one another, as we should be.

Book-spine poems are on my radar lately because many of the poets I follow on social media have been creating them as a way of being productive while under pandemic quarantine. TAB: The Journal of Poetry and Poetics even has a call for submissions for Book-Spine Poems. I learned that:

In 2013, New York-based artist Nina Kathchadourian published a collection of photographs book spines called Sorted Books. In the book’s introduction, Brian Dillon writes, “it is as though the books have convened of their own accord like plants or insects—following secret or, in the case of more explicitly comic or narrative groupings, not-so-secret attractions.”

A little bit about each book:
Americanah by Chimamanda Ngozi Adichie. Fiction. From the author’s website:
Ifemelu and Obinze are young and in love when they depart military-ruled Nigeria for the West. Beautiful, self-assured Ifemelu heads for America, where despite her academic success, she is forced to grapple with what it means to be black for the first time. Quiet, thoughtful Obinze had hoped to join her, but with post-9/11 America closed to him, he instead plunges into a dangerous, undocumented life in London. Fifteen years later, they reunite in a newly democratic Nigeria, and reignite their passion—for each other and for their homeland.

Citizen by Claudia Rankine has been called both poetry and cultural criticism. From the publisher’s website:
Claudia Rankine’s bold new book recounts mounting racial aggressions in ongoing encounters in twenty-first-century daily life and in the media. Some of these encounters are slights, seemingly slips of the tongue, and some are intentional offensives in the classroom, at the supermarket, at home, on the tennis court with Serena Williams and the soccer field with Zinedine Zidane, online, on TV—everywhere, all the time. The accumulative stresses come to bear on a person’s ability to speak, perform, and stay alive. Our addressability is tied to the state of our belonging, Rankine argues, as are our assumptions and expectations of citizenship. In essay, image, and poetry, Citizen is a powerful testament to the individual and collective effects of racism in our contemporary, often named “post-race” society.

Deaf Republic by Ilya Kaminsky. Poetry. I’m very much aware that Deaf Republic is the one of two titles in my Book-Spine Poem not written by a black author. Yet I’m also very much aware that Ilya Kaminsky, its white author, wrote something prophetic. From the back cover: Deaf Republic stands as a warning and powerful questioning of our own collective silence in the face of our time’s atrocities. I wanted this plea against remaining silent to be part of the reckoning we’re going through nationally and internationally.

Between the World and Me by Ta-Nehisi Coates. Nonfiction. From the author’s website:
In a profound work that pivots from the biggest questions about American history and ideals to the most intimate concerns of a father for his son, Ta-Nehisi Coates offers a powerful new framework for understanding our nation’s history and current crisis. Americans have built an empire on the idea of “race,” a falsehood that damages us all but falls most heavily on the bodies of black women and men—bodies exploited through slavery and segregation, and, today, threatened, locked up, and murdered out of all proportion.

The Fire This Time: A New Generation Speaks About Race. Edited by Jesmyn Ward. Essay collection. From Jesmyn Ward’s website:
In light of recent tragedies and widespread protests across the nation, The Progressive magazine republished one of its most famous pieces: James Baldwin’s 1962 “Letter to My Nephew,” which was later published in his landmark book, The Fire Next Time. Addressing his fifteen-year-old namesake on the one hundredth anniversary of the Emancipation Proclamation, Baldwin wrote: “You know and I know, that the country is celebrating one hundred years of freedom one hundred years too soon.” Award-winning author Jesmyn Ward knows that Baldwin’s words ring as true as ever today. In response, she has gathered short essays, memoir, and a few essential poems to engage the question of race in the United States. And she has turned to some of her generation’s most original thinkers and writers to give voice to their concerns.

Racing to Justice by john a. powell. Essays. From the publisher’s website:
Renowned social justice advocate john a. powell persuasively argues that we have not achieved a post-racial society and that there is much work to do to redeem the American promise of inclusive democracy. Culled from a decade of writing about social justice and spirituality, these meditations on race, identity, and social policy provide an outline for laying claim to our shared humanity and a way toward healing ourselves and securing our future. Racing to Justice challenges us to replace attitudes and institutions that promote and perpetuate social suffering with those that foster relationships and a way of being that transcends disconnection and separation.

One With Others by CD Wright. Poetry blended with investigative journalism. This is the other title in my Book-Spine Poem not written by a Black author, but rather by a White woman. I made this exception because both the book title and its subject show what true White support for Black lives looks like. From the publisher’s website:
Investigative journalism becomes the poet’s realm as C.D. Wright returns to her native Arkansas and examines an explosive incident grounded in the Civil Rights Movement. In her signature style, Wright interweaves oral histories, hymns, lists, interviews, newspaper accounts, and personal memories—especially those of her incandescent mentor, Mrs. Vittitow (V)—with the voices of witnesses, neighbors, police, activists, and a group of black students who were rounded up and detained in an empty public swimming pool.

Just Mercy by Bryan Stevenson. Nonfiction book. Film. From the Equal Justice Initiative website:
An unforgettable true story about the potential for mercy to redeem us, and a clarion call to end mass incarceration in America — from one of the most inspiring lawyers of our time…Just Mercy tells the story of Equal Justice Initiative, from the early days with a small staff facing the nation’s highest death sentencing and execution rates, through a successful campaign to challenge the cruel practice of sentencing children to die in prison, to revolutionary projects designed to confront Americans with our history of racial injustice.

All About Love by bell hooks. Essays. From the publisher’s website:
All About Love is a revelation about what causes a polarized society and how to heal the divisions that cause suffering. Here is the truth about love, and inspiration to help us instill caring, compassion, and strength in our homes, schools, and workplaces.

There are many, many more books, films, podcasts, and humans to read, to watch, to listen to.

May we humans not be a deaf republic.
May we educate ourselves and reimagine a culture of inclusivity and equity.
May we be, as bell hooks imagines us into being, all about love. For it is only with love for all that we may move forward in any lasting longtime peace.